Mon - Fri 8:00am-4:45pm (216) 771-3450
info@boydwatterson.com
Sentiment and valuation metrics have been accelerating throughout the second and third quarters of 2020, following the large selloff experienced in the first quarter.  These indicators are increasing to levels that have historically made equity markets vulnerable to increases in volatility and susceptible to large declines.  This is occurring ahead of several potential volatility events around the election, fiscal policy decisions, and the spread and treatment of COVID-19.  Below we layout where some of these indicators stand and what to watch for.
There are several ways to monitor investor sentiment.  Ned Davis Research (NDR) created a Global Daily Sentiment Composite and they compare the five-week trend to the 52-week trend.  When the ratio of the two goes above the long-term trend, but later declines (five-week trend goes above the 52-week and then declines), it has historically been a negative sign.  During large selloffs, the Global Daily Sentiment Composite usually bottoms in the single digits. 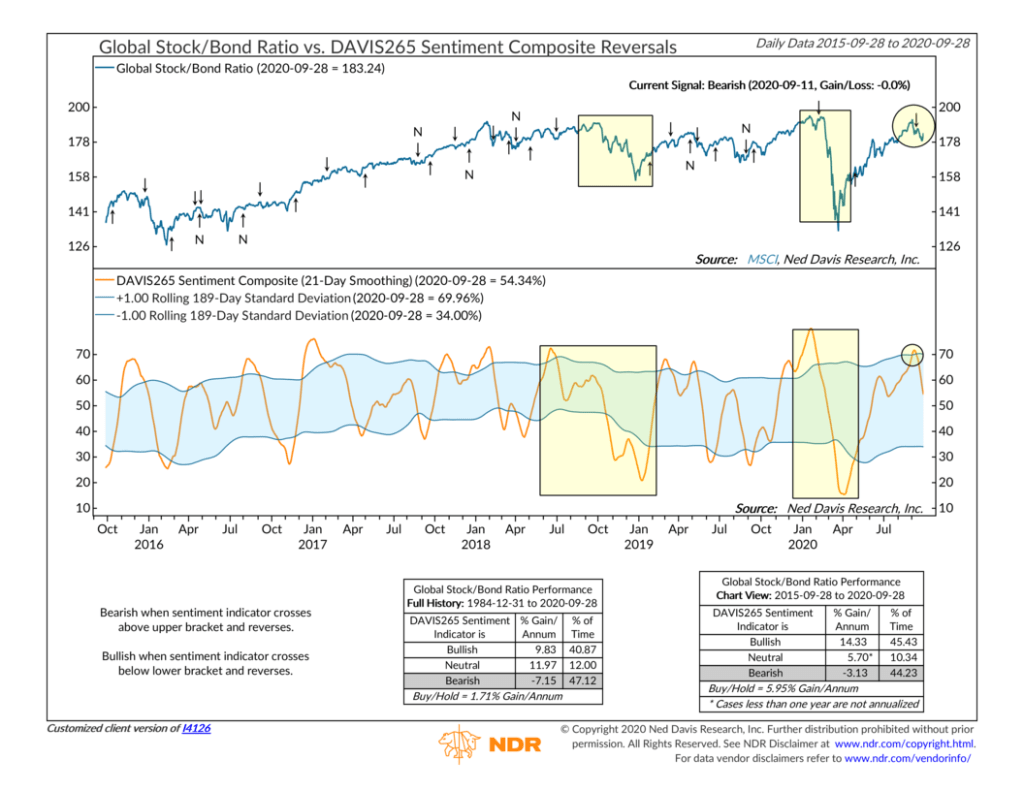 The ratio recently went above the long-term trend and has been declining throughout September as overall sentiment has been declining.  If these indicators continue to decline, they likely have much lower to go before they reach a bottom, based on historical observations.  This could be negative for near-term equity returns.

Other measures of sentiment are based on market breadth and how many of the underlying parts of equity indexes are going up or down.  Over the course of the summer, the number of stock markets that make up the All Country World Index (ACWI) equity index that are above their 50-day moving average has been declining.  The equal-weighted ACWI has been underperforming the market cap-weighted version for several years, and the trend has accelerated since March 2020. 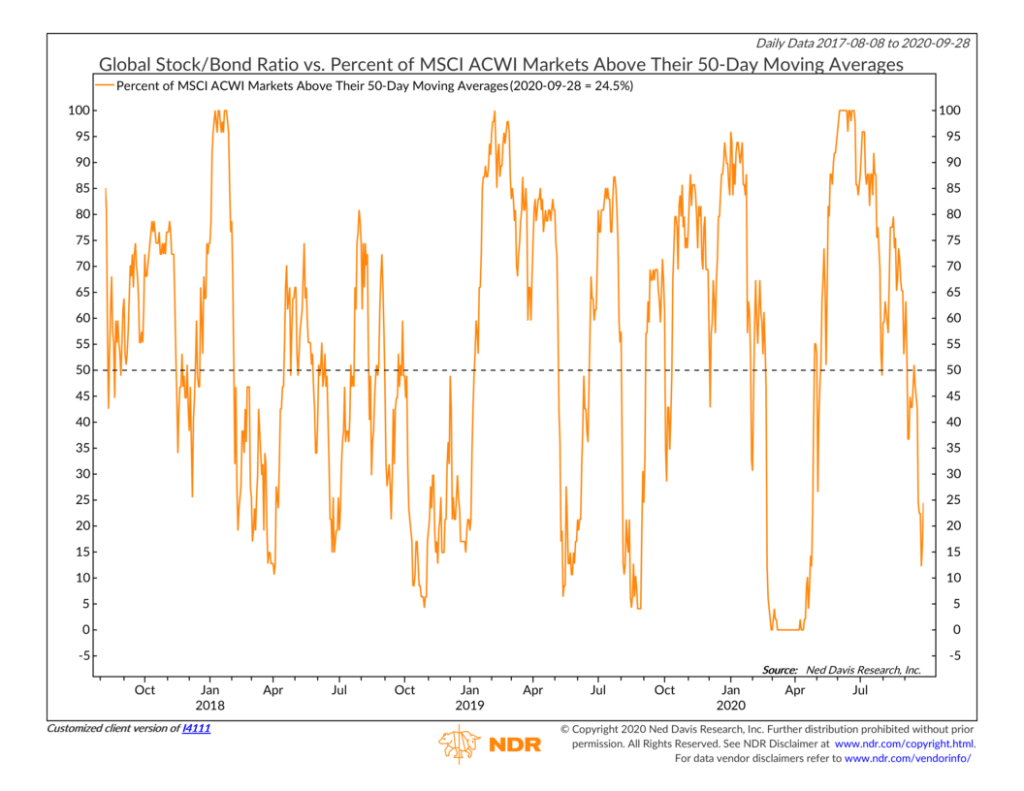 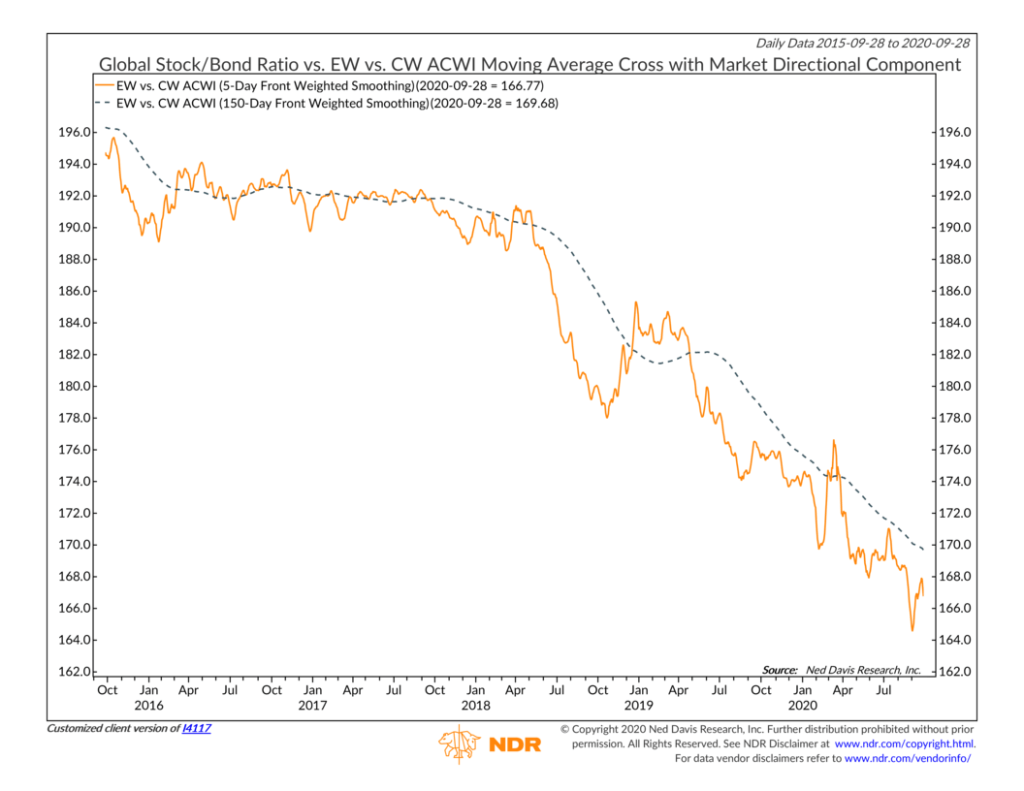 These are further examples that investor sentiment has increased and has become more concentrated into smaller portions of the global equity market.

This has helped contribute to some of the valuation trends that have been developing.  The ACWI price to earnings ratio (P/E) is currently at a 10-year high of 23 on a trailing basis and an 18-year high of 19 using forward earnings. 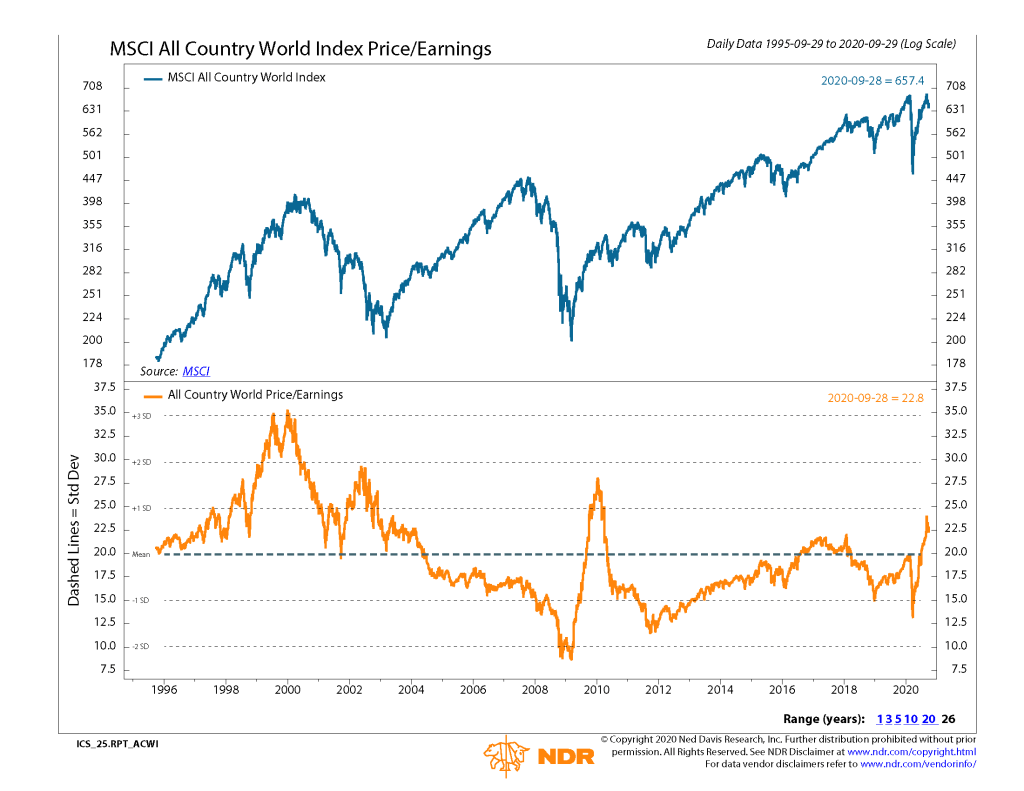 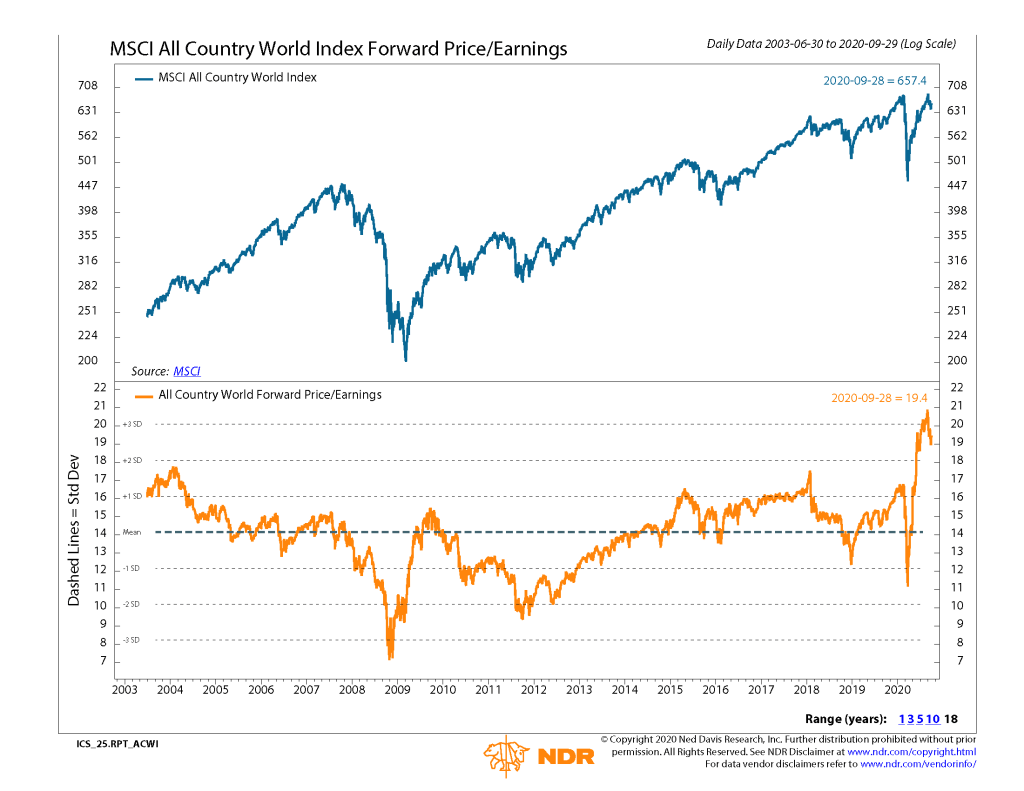 A large driver of the increase in the ACWI P/E has been the increase in the U.S. P/E, as the U.S. is the largest part of the ACWI.  The U.S. P/E is currently 5.6 points higher than the ACWI P/E, which is the widest spread since 2002.  The U.S. trailing and forward P/E’s are higher than the levels reached before the selloffs in late 2018 and March of 2020. 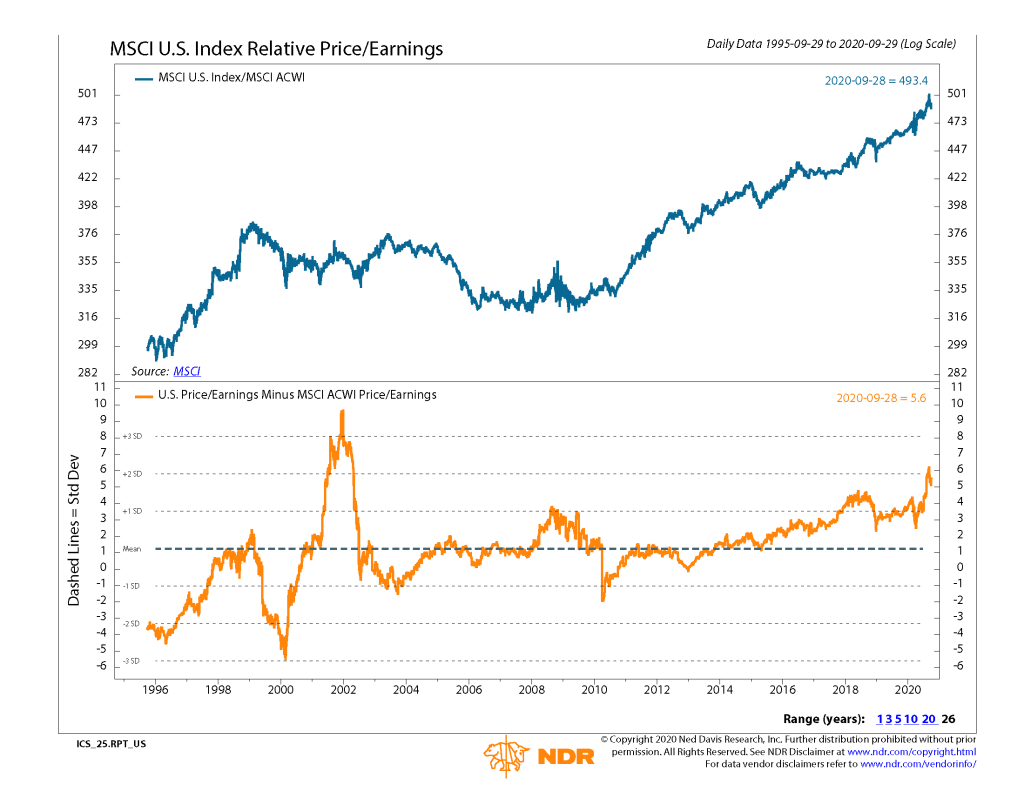 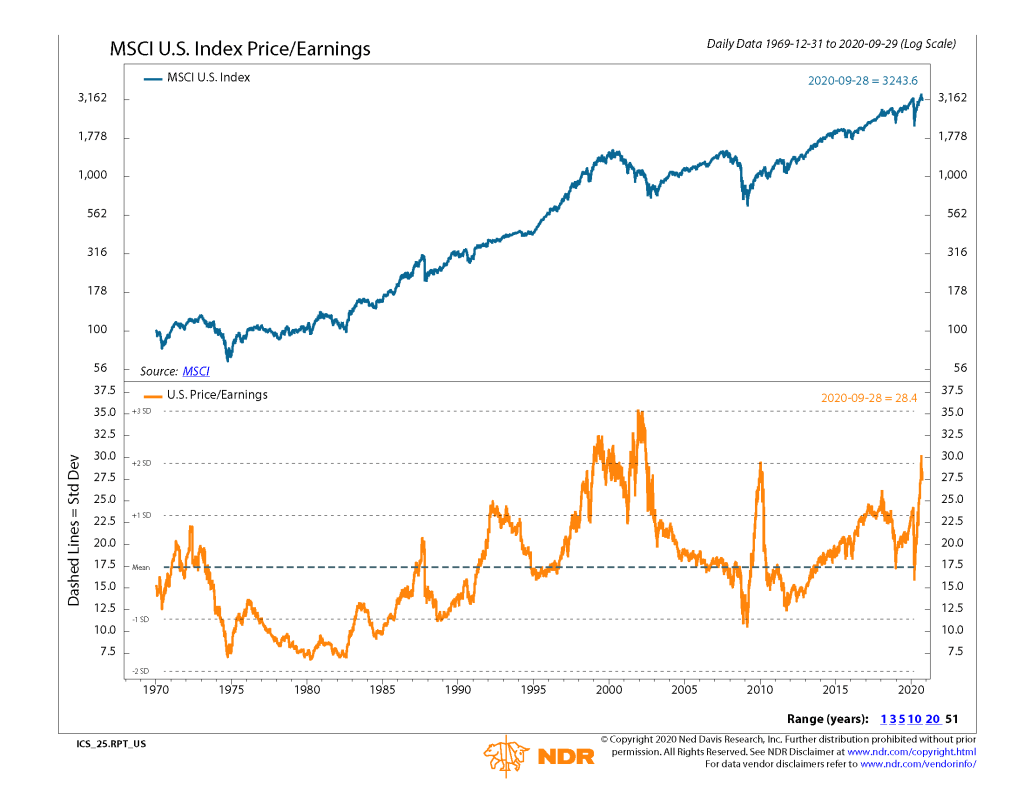 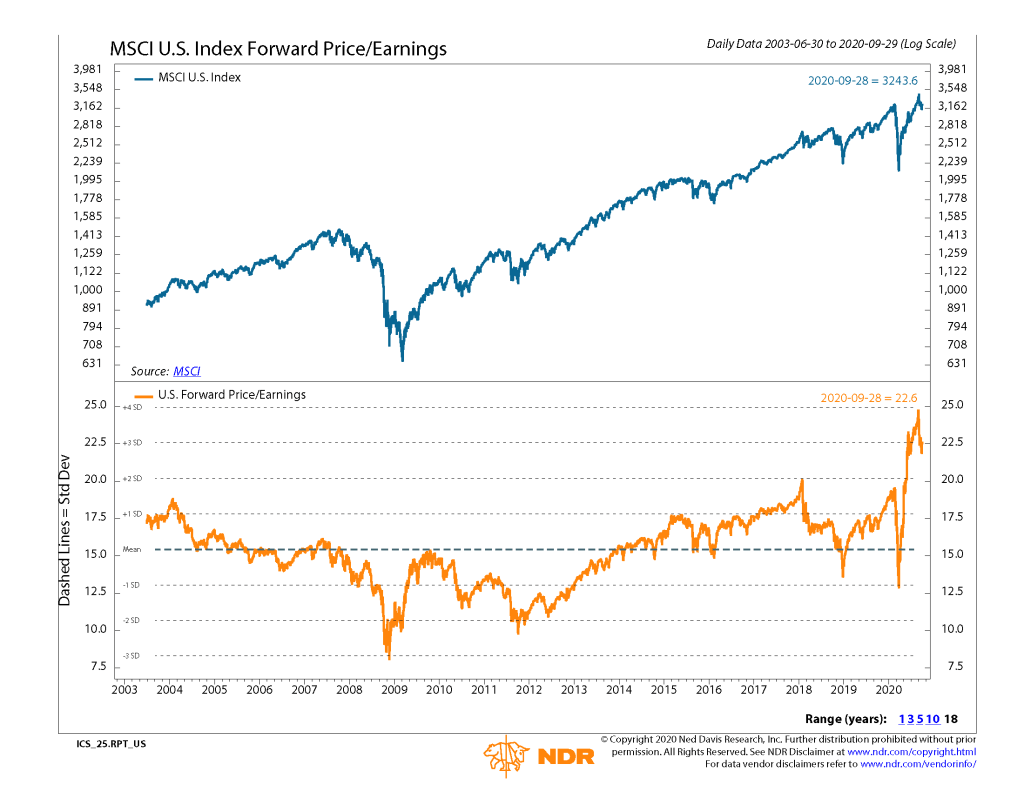 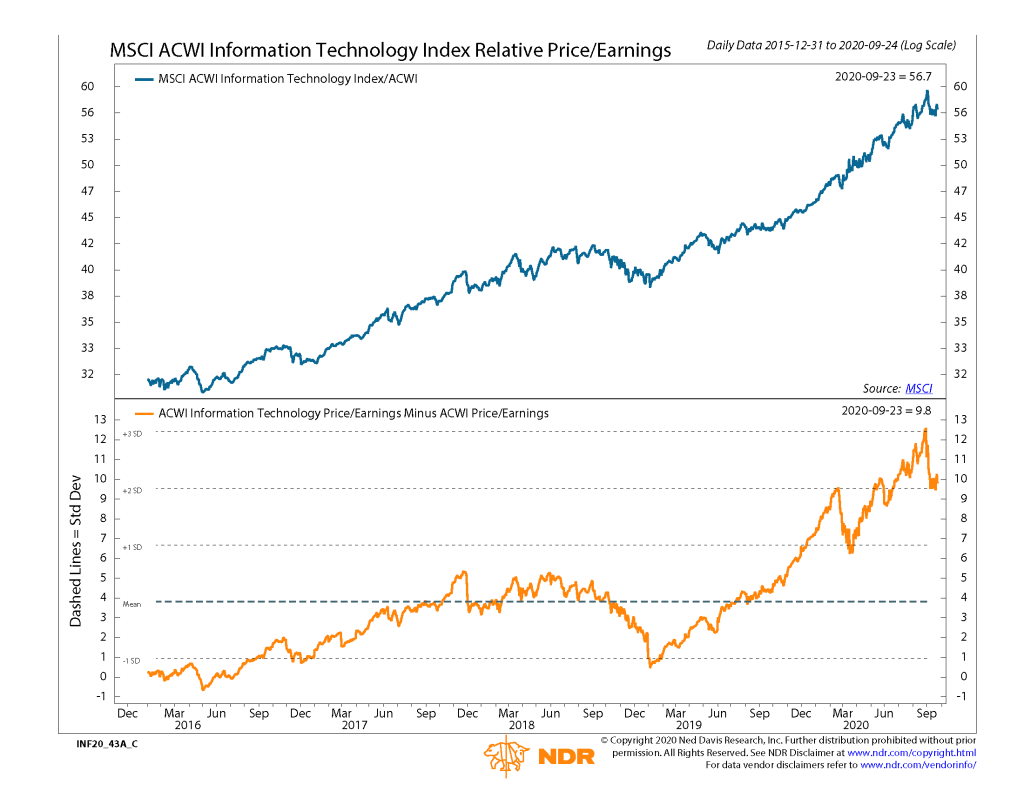 The increase in the valuation levels of the largest Technology companies has contributed to the ACWI becoming very concentrated.  At the beginning of September, the top 10 positions in the ACWI represented 18% of the total market (a record high).  This has since declined slightly but remains at a very higher level. 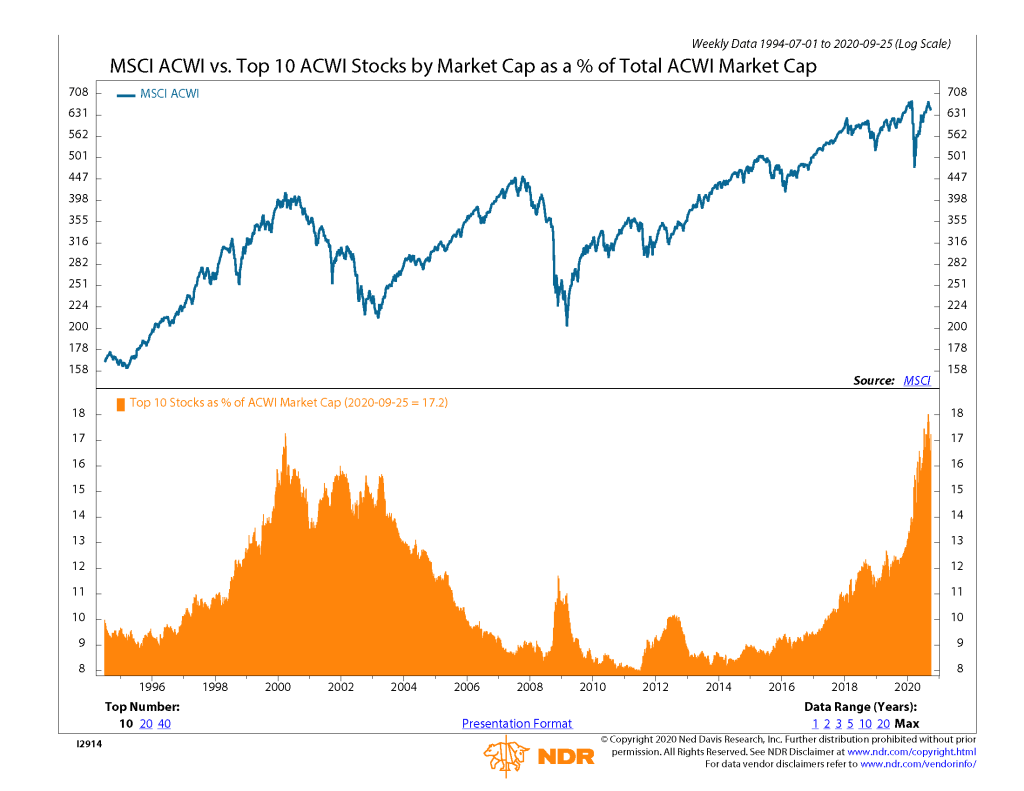 If these large cap companies continue to underperform, it is unlikely that the index will continue to be positive, given their outsized representation.

On a longer term trend basis, if the global equity market continues to experience rolling spikes in volatility and a lack of broad participation in positive rallies, this could be a sign that the long-term bullish trend of the last decade could be coming to an end and a new secular bearish trend could develop.