The third quarter GDP report was another reminder that the consumer continues to be the main source of positive economic growth in the U.S.  GDP growth in the third quarter was 1.9% annualized, the exact contribution from Personal Consumer Expenditures.  Private nonresidential investment (capex) declined by 3% annualized and detracted from GDP growth for the second consecutive quarter.  This most recently occurred in Q4 2015 and Q1 2016, as slowdowns in the manufacturing and commodities industries lead to a reduction in corporate investment.  Corporate investment and profits eventually rebounded in the second half of 2016 and the economic expansion carried on.  The U.S. economy is facing a similar set up, where the consumer is taking on the responsibility of carrying the GDP load.  It is often noted that the U.S. consumer is responsible for 70% of total GDP growth, but what is often left out is that the other 30% are responsible for the majority of the variability in GDP growth.

The consumer derives consumption ability from income, most of which is linked to employment.  As we have mentioned in prior posts, corporate investment generally leads the direction of corporate profits, which, in turn, generally leads the direction of employment.   If capital investment and corporate profits continue to weaken, there is a strong possibility that corporations will have to cut expenses (beyond capex).  For most companies, it would be labor.  This could potentially result in a slowdown of new hires, a reduction of hours worked, and possble layoffs.  A research firm we follow called Hedegye recently summed up this situation in the following quote,

“If investment is slowing (no tailwind for productivity growth), growth is past peak and late-cycle wage inflation continues to manifest, there will exist persistent pressure on margins/profitability.  And if margins/EPS are slowing, that drags on marginal hiring decisions and further pressures Capex spending and risk propagating a negative, self-reinforcing dynamic.” 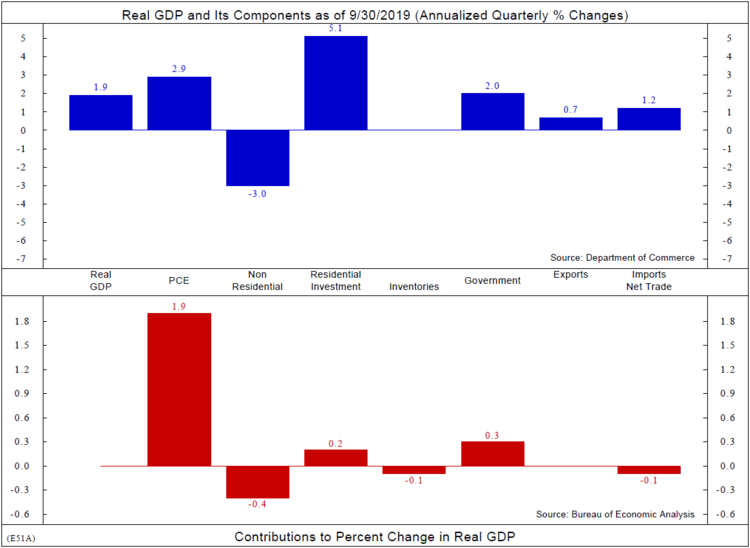