We’re nearly halfway through the year and we believe 2017 may go down as one of the worst years for the American retail industry. Despite indicators like consumer confidence, job growth and unemployment all pointing to an improving economic environment, the retail industry is moving in the opposite direction and hemorrhaging jobs, actually shedding a little more than 80,000 jobs in the first five months of the year. In addition to job losses, a handful of big-name chains like Gander Mountain, Gymboree, hhgregg, The Limited, Payless ShoeSource and RadioShack, have all been added to the growing list of companies that have sought bankruptcy protection in 2017. Year-to-date, retailers as a whole have announced more than 4,000 store closures, which is already more than the number of closures announced during all of 2016 and is on pace to exceed the recession high watermark of nearly 7,000 store closures during 2008.

It shouldn’t come as a surprise to anyone that the convenience and speedy delivery offered by online shopping, coupled with shifting consumer shopping habits, likely has been the impetus for the widespread and hasty restructuring we’ve seen within the American retail landscape. Led by giants with deep pockets, massive scale and strong customer reach (think Amazon and Alibaba), the global e-commerce business expanded at a 23% annual clip between 2010 and 2016 to become a thriving $1.9 trillion industry. In fact, the combined gross merchandise value of both Amazon and Alibaba currently represents a little more than 1% of global GDP. 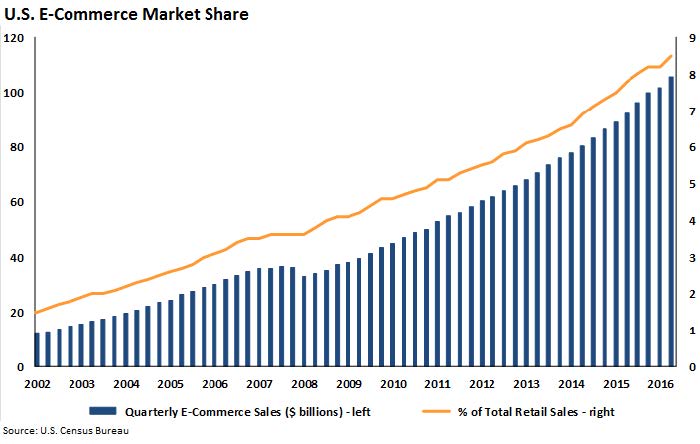 The primary victims are businesses that have a significant physical store footprint and sell goods which can easily be purchased online. Electronics, apparel, footwear and sporting goods retailers are prime examples as well as department stores like Dillard’s, JC Penney, Kohl’s and Macy’s, and big-box discounters like Target and Walmart. The dual threat from e-commerce comes from the disruption it’s causing by grabbing market share in many different areas of the retail space and destroying customer traffic in places like malls and other brick and mortar stores. E-commerce penetration of core retail sales was about 14% during the first quarter of 2017 and will likely become larger over time.

Despite all of the negative sentiment in the market, with some even calling this phenomenon the “retail apocalypse”, this is not the end of retail. Some areas of retail are either insulated to some degree from digital retail or are adapting to the changing landscape. Home improvement, auto parts, food & drug, off-price and dollar retailers are several areas that may possess a certain degree of immunity from e-commerce either due to regulation, complexities related to distribution or the value-add of their products offline. Companies have also begun to adapt by investing in omni-channel marketing of their products and scaling out their online presence. Walmart’s purchase of Jet.com last year for $3.30 billion and the recent acquisition of Chewy.com by PetSmart for $3.35 billion are perfect illustrations of how some companies are evolving alongside the industry.

The retail sector likely has more turbulent times ahead as it continues to rapidly transform, but such dislocations create winners and losers.. Instead of avoiding the sector altogether, savvy investors will likely search for those retailers that are quickly adapting and recognizing efficiencies.