The FOMC started raising the Fed Funds Rate on December 16, 2015.  The FOMC did not increase the Fed Funds Rate again until December 14, 2016 but started to implement rate increases on a more regular basis going forward until December 19, 2018.  As shown in the table below, the 3-month Treasury Bill has increased significantly, while the 30-year Treasury Bond has declined, and the 10-year Treasury Note has barely changed.

Based on this analysis, it appears the answer to the question, have interest rates been increasing, is only short-term interest rates.  That is certainly the case when looking at the Treasury market.  But, what about the credit market?

Yields have dropped significantly across the corporate credit market since the Fed Funds Rate started to increase on December 16, 2015.  The decline in the bank loan market is surprising given that they are floating rate, and short-term rates have increased.  This is generally a result of tighter spreads on a higher basis.  Yields on CMBS are basically unchanged.  Yields have increased for ABS, as most of these are shorter term maturities and price more in-line with front end interest rates.

We have been able to identify yields on longer maturity Treasuries and corporate credit markets have declined since the FOMC started to raise the Fed Funds Rate.  The next question to answer is, how does this compare to prior periods when the Fed Funds Rate was increasing?

From looking at the data in the table below, a similar pattern developed in the last hiking cycle as the 3-month Treasury increased significantly, while the 10-year increased 60 bps and the 30-year declined.  During the hiking cycle of the late 1990s, once again, the 3-month Treasury Bill increased significantly, but the 10- and 30-year Treasuries did increase some.  In the mid-1990s, rates increased across the Treasury curve.  The hiking cycles in the 1990s were a bit different than the current and mid-2000s, as the FOMC raised and lowered the Fed Funds Rate throughout the decade.  In the last two hiking cycles, the FOMC consistently increased the Fed Funds Rate without an intermittent rate cut.

Based off this analysis, it appears that it is not unusual for the curve to flatten and longer-term rates to decline while front end interest rates increase in concert with the Fed Funds Rate.

The corporate market is a different story but has a more limited data history.  During the last two periods when the FOMC was increasing the Fed Funds Rate, the yields across the credit sector increased.  This is the opposite of what we have seen in the current cycle.

The low yield levels coupled with our increased concerns about the macro environment, in general, and the corporate market, specifically, reinforce our cautious stance on corporate credit. 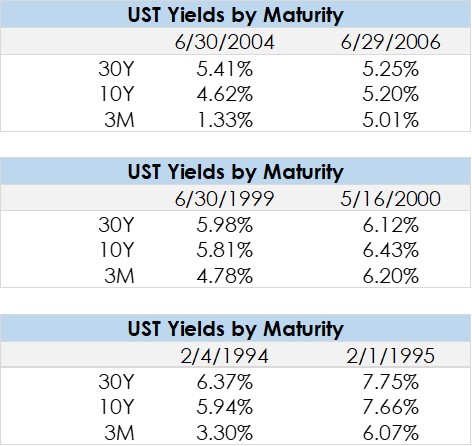 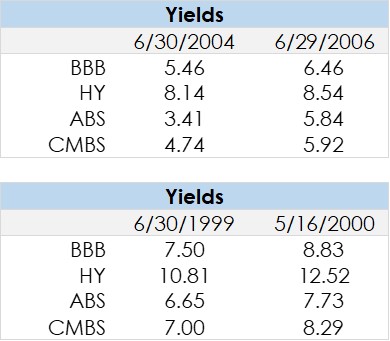